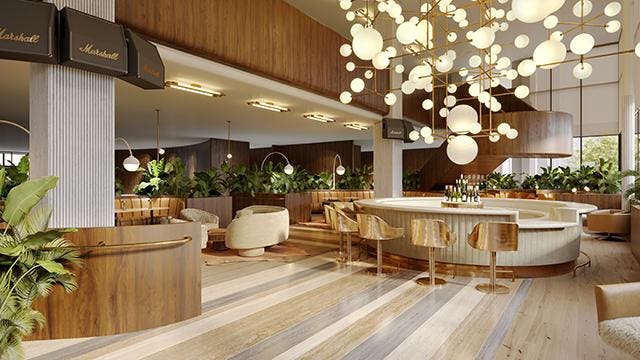 When completed, the light-filled double-height bar area at the C. Baldwin Hotel in Houston – soon to debut as one of Hilton’s Curio Collection properties – is key to the through-view across the hotel’s ground level to adjacent green space at Allen Center, also under redevelopment by owner Brookfield Properties. COURTESY OF THE C. BALDWIN

The renovation and rebranding and of the former DoubleTree by Hilton Houston Downtown into a Curio Collection property named the C. Baldwin is shining some limelight on one of the city’s lesser-known co-founders.

While the legacy of Charlotte, who was married to founding brother Augustus Chapman Allen, acknowledges her pioneering role as “Mother of Houston” and lauds her hands-on 19th c. presence as a pivotal businesswoman, cattle rancher, philanthropist and trailblazer, her name has only graced an elementary school, a steamboat, and a city park.

As the C. Baldwin hotel ownership – Brookfield Properties – renovates the 40-year-old property at 400 Dallas St. into the second of Hilton’s boutique Curio properties downtown, her name will mark a gateway location on the west side of downtown. Meanwhile, higher-level views from the hotel take in the very bayou she and the brothers Allen punted to reach the muddy banks of their incipient townsite.

Behind the pipe and drape 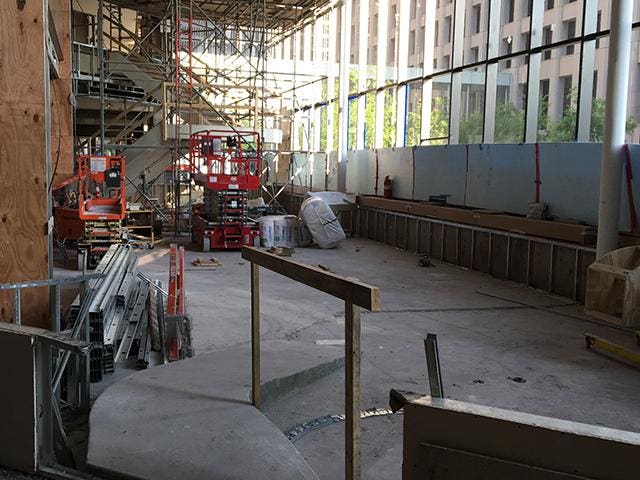 Houston has some great hotels, but none is emblematic of the city’s mojo as a “boot-strapping economic powerhouse and global hub that just happens to be wildly diverse, wonderfully eccentric and exceedingly cosmopolitan,” General Manager Maggie Rosa says in project announcements. It was time to introduce a hospitality experience that embodies that “while honoring an awe-inspiring female pioneer.”

C. Baldwin sources said the target market is independent travelers and, to some extent, female travelers.

During the current renovation project, which is expected to re-launch in a series of soft openings in the months ahead, the hotel has remained open. In June, the hotel’s new identity takes hold, with meeting rooms rolling out in July and guest rooms fully loaded with amenities by the end of August. Food and beverage offerings are a September debut, including the new restaurant, Rosalie.

On a hard hat tour of the construction site, Chris Baran, sales and marketing director, said the design process and thinking went hyper-local: “It eats, sleeps and breathes Houston.” Any doubts or challenges along the way, he said, would trigger a discussion of “WWCD” – or What Would Charlotte Do? 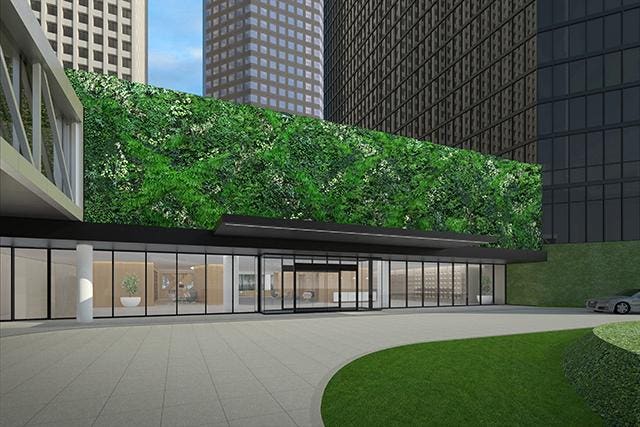 A living wall above the entry is one way the hotel has modernized its mood.

COURTESY OF THE C. BALDWIN

From the street, the re-booting property has a more guest-friendly arrival off the circular driveway due to a “living wall” of greenery above the storefront windows. Inside, the lobby’s extended “resort-style” layout allows guests to access (or avoid) common areas scaled for events, Baran explained. (In other words, step right for the inn, step left for events, step-through for the social hub.) One new feature is showroom-style retractable windows for driving display cars into the building. Another isn’t build-out, it’s a signature scent. Some local history references are planned for one of the lobby walls.

Given the needle-nosed end of the 20-story tower, some guest rooms and suites incorporate unique floor plans. All are fully loaded with modern amenities, high-end finishes and a collection of artwork depicting the local vibe, from fashion to settings. The ground level, newly flooded in natural light after its ’80s-vintage dark and draped mode, has a deliberate through-view that’s intended to connect the now much greener spaces of the property.

Baran said the more open space connects the hotel visually and physically to Allen Center. That three-tower office complex of 3.2 million square feet is also in the midst of multi-phased redevelopment by Brookfield. Its first phase of re-imagining, estimated at $48.5 million, opened in 2017. 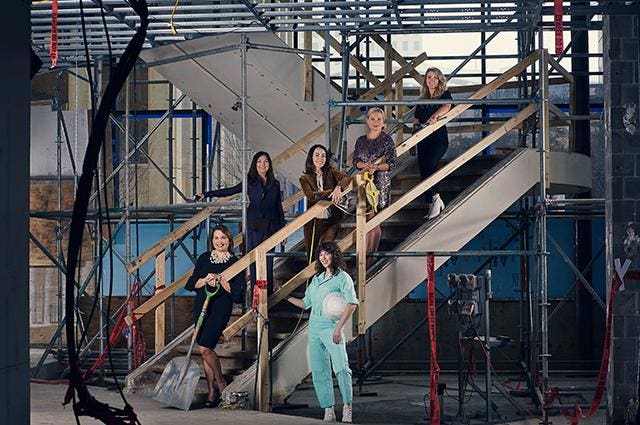 Among the team players in the redevelopment and rebranding of the C. Baldwin, a Curio Collection by Hilton Hotel in Houston are several prominent women.

The C. Baldwin redevelopment project team includes contractors Houston-based Tellepsen, Turner Construction Co., and architects Morrison Dillworth + Walls and Design One. True to the project’s namesake, several successful businesswomen are playing significant roles in the transformation. Among them – and in addition to Rosa:

And Charlotte? WWCD? Would she smile at her modern-day moment? She’s sharing it a bit. The development team has rolled with the pioneering woman theme by naming its meeting rooms after prominent Texas women: Adina De Zavala, an early, tireless protector of Texas History – including efforts to save portions of the Alamo; Sen. Barbara Jordan, a lawyer, educator, politician and Civil Rights leader; pilot Bessie Coleman, also known as Brave Bessie and The Only Race Aviatrix in the World; Edna Dee Woodford Saunders, empress of the arts in Houston; Miriam “Ma” Ferguson, the first female governor of Texas; Isabel Brown Wilson, businesswoman, journalist and cultural philanthropist; and rock, soul and blues singer-songwriter Janis Joplin, music legend.